The Wild Cats of South Africa – The Lion

The lion (Panthera leo) is classified as one of the five big cats in the genus Panthera which includes the Tiger, Lion, Jaguar, Leopard and Snow Leopard.  Only members of this genus are able to roar. With some males in excess of 250kg, it is the second-largest cat in the world (tiger being largest), and the largest cat in Africa. Lion populations are now no longer able to exist outside designated reserves and national parks. Although the cause of the decline is not fully understood, habitat loss and conflicts with humans are currently the greatest causes of concern.

The lion (Panthera leo) is classified as one of the five big cats in the genus Panthera which includes the Tiger, Lion, Jaguar, Leopard and Snow Leopard.  Only members of this genus are able to roar. With some males in excess of 250kg, it is the second-largest cat in the world (tiger being largest), and the largest cat in Africa. Lion populations are now no longer able to exist outside designated reserves and national parks. Although the cause of the decline is not fully understood, habitat loss and conflicts with humans are currently the greatest causes of concern.

Habitat: In Africa, lions can be found in savanna grasslands with scattered Acacia trees, which serve as shade; their habitat in India is a mixture of dry savanna forest and very dry deciduous scrub forest

Distribution: Most lions now live in eastern and southern Africa, and their numbers there are rapidly decreasing, with an estimated 30–50% decline per 20 years in the late half of the twentieth century. The remaining populations are often geographically isolated from one another, which can lead to genetic bottlenecking and in-breeding, similar to issues facing cheetahs today. The lion population in the region of West Africa is isolated from lion populations of Central Africa, with little or no exchange of breeding individuals. The number of mature individuals in West Africa is estimated by two separate recent surveys at 850–1,160 (2002/2004). There is disagreement over the size of the largest individual population in West Africa: the estimates range from 100 to 400 lions in Burkina Faso’s Arly-Singou eco-system.  Another population in northwestern Africa is found in Waza NAtional Park  where approximately 14–21 animals persist.

The white lion is not a separate subspecies but rather caused by a recessive gene. Big, dark manes on male lions are an indication of health and vigor and these males are favoured by females. White lions do occur naturally in the wild but they are rare.

Miscellaneous:  Lions spend much of their time resting and are inactive for about 20 hours per day.  Although lions can be active at any time, their activity generally peaks after dusk with a period of socialising, grooming, and defecating. Intermittent bursts of activity follow through the night hours until dawn, when hunting most often takes place. They spend an average of two hours a day walking and 50 minutes eating.

Size and Appearance: The size of adult lions varies across their range with those from the southern African populations in Zimbabwe, the Kalahari and Kruger Park averaging around 189.6 kg and 126.9 kg in males and females respectively compared to 174.9 kg and 119.5 kg  of male and female lions from East Africa. Body measurements in males are head-body lengths ranging from 170 to 250 cm, tail lengths of 90–105 cm. In females reported head-body lengths range from 140 to 175 cm, tail lengths of 70–100 cm. Lions are the only members of the cat family to display obvious sexual dimorphism – that is, males and females look distinctly different. They also have specialised roles that each gender plays in the pride. For instance, the lioness, the hunter, lacks the male’s thick mane. The colour of the male’s mane varies from blond to black, generally becoming darker as the lion grows older. The most distinctive characteristic shared by both females and males is that the tail ends in a hairy tuft. In some lions, the tuft conceals a hard “spine” or “spur”, approximately 5 mm long, formed of the final sections of tail bone fused together. The lion is the only felid to have a tufted tail – the function of the tuft and spine are unknown. Absent at birth, the tuft develops around 5 1⁄2 months of age and is readily identifiable at 7 months.

Reproduction and Offspring: Most lionesses will have reproduced by the time they are four years of age. Lions do not mate at any specific time of year, and the females come into heat several times a year.  A lioness may mate with more than one male when she is in estrous. The average gestation period is around 110 days, the female giving birth to a litter of one to four cubs in a secluded den. She will often hunt by herself while the cubs are still helpless, staying relatively close to the thicket or den where the cubs are kept. Usually, the mother does not integrate herself and her cubs back into the pride until the cubs are six to eight weeks old. Lionesses in a pride often synchronise their reproductive cycles so that they cooperate in the raising and suckling of the young (once the cubs are past the initial stage of isolation with their mother), who suckle indiscriminately from any or all of the nursing females in the pride. In addition to greater protection, the synchronization of births also has an advantage in that the cubs end up being roughly the same size, and thus have an equal chance of survival. In addition to starvation, cubs also face many other dangers, such as predation by jackals, hyenas, leopards, martial eagles, and snakes. Furthermore, when one or more new males oust the previous male(s) associated with a pride, the conqueror(s) often kill any existing young cubs, perhaps because females do not become fertile and receptive until their cubs mature or die. All in all, as many as 80% of the cubs will die before the age of two.

Social System and Communication: Lions are the most socially inclined of all wild felids, most of which remain quite solitary in nature. The lion is a predatory carnivore with two types of social organization. Some lions are residents, living in groups of related lionesses, their mates, and offspring. Such a group is called a pride. Females form the stable social unit in a pride and do not tolerate outside females. Membership only changes with the births and deaths of lionesses, although some females do leave and become nomadic. Although extremely large prides, consisting of up to 30 individuals, have been observed, the average pride consists of five or six females, their cubs of both sexes, and one or two males (known as a coalition if more than one) who mate with the adult females.

The most common peaceful communications whilst lions are resting are head rubbing and social licking which has been compared to grooming in primates.  Nuzzling one’s forehead, face and neck against another lion – appears to be a form of greeting.  Lions tend to roar in a very characteristic manner, starting with a few deep, long roars that trail off into a series of shorter ones. They most often roar at night; the sound, which can be heard from a distance of 8 kilometres, is used to advertise the animal’s presence. Lions have the loudest roar of any big cat.

Hunting and Diet: Lions prefer to scavenge when the opportunity presents itself with carrion providing more than 50% of their diet. They scavenge animals either dead from natural causes  (disease) or killed by other predators, and keep a constant lookout for circling vultures, being keenly aware that they indicate an animal dead or in distress. The lionesses do most of the hunting for the pride. The male lion associated with the pride usually stays and watches over young cubs until the lionesses return from the hunt. Typically, several work together and encircle the herd from different points. Once they have closed in on the herd, they usually target the animal closest to them. The attack is short and powerful; they attempt to catch the victim with a fast rush and final leap. The prey usually is killed by strangulation. The prey consists mainly of medium-sized mammals, with a preference for wildebeest, zebras, buffalo and warthogs. Occasionally, they take relatively small species such as Thomson’s gazelle or springbok.

Principal Threats: The lion has been classified as a Vulnerable Species by the IUCN because of the significant decline in the wild population. In South Africa, the lion no longer occurs outside national parks and game reserves. The principle threat to lions in the wild is habitat loss and conflicts with humans, however in more recent years, the increase in predator sport hunting and trophy hunting has highlighted many unacceptable practices that have developed with the breeding of lions in captivity to provide a constant supply to the hunting industry. 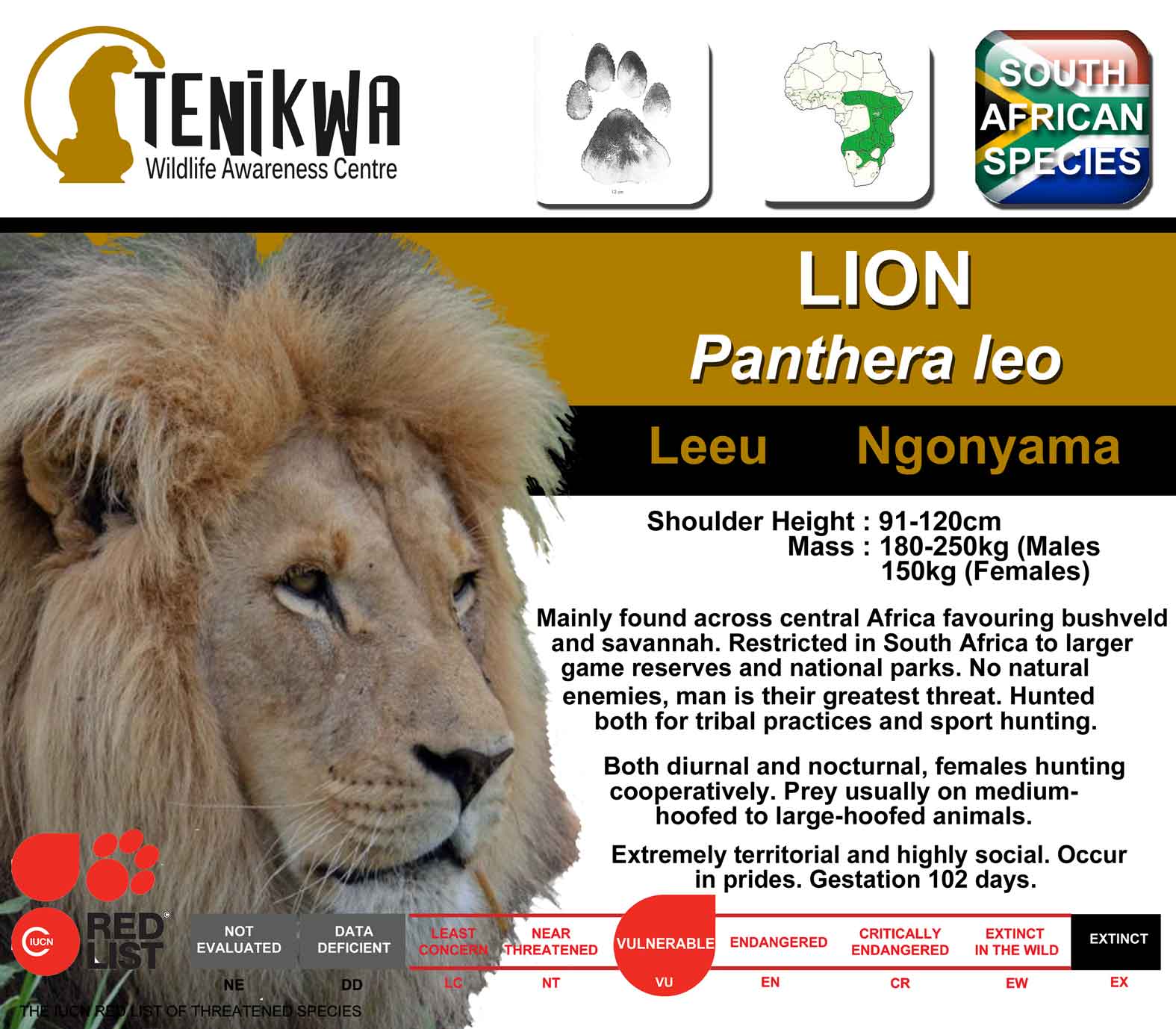 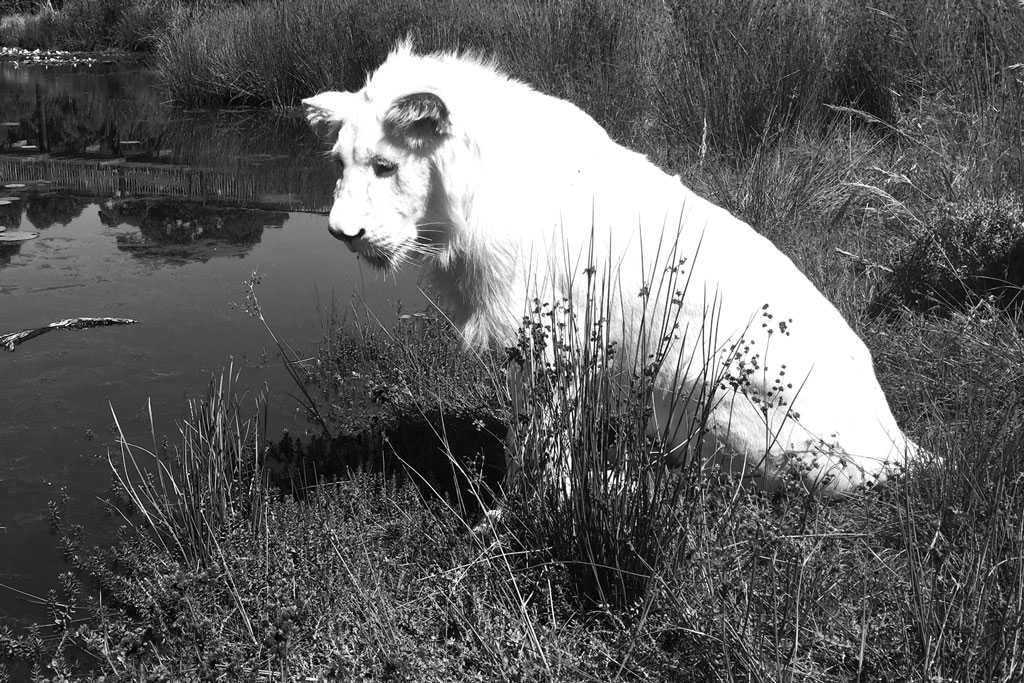 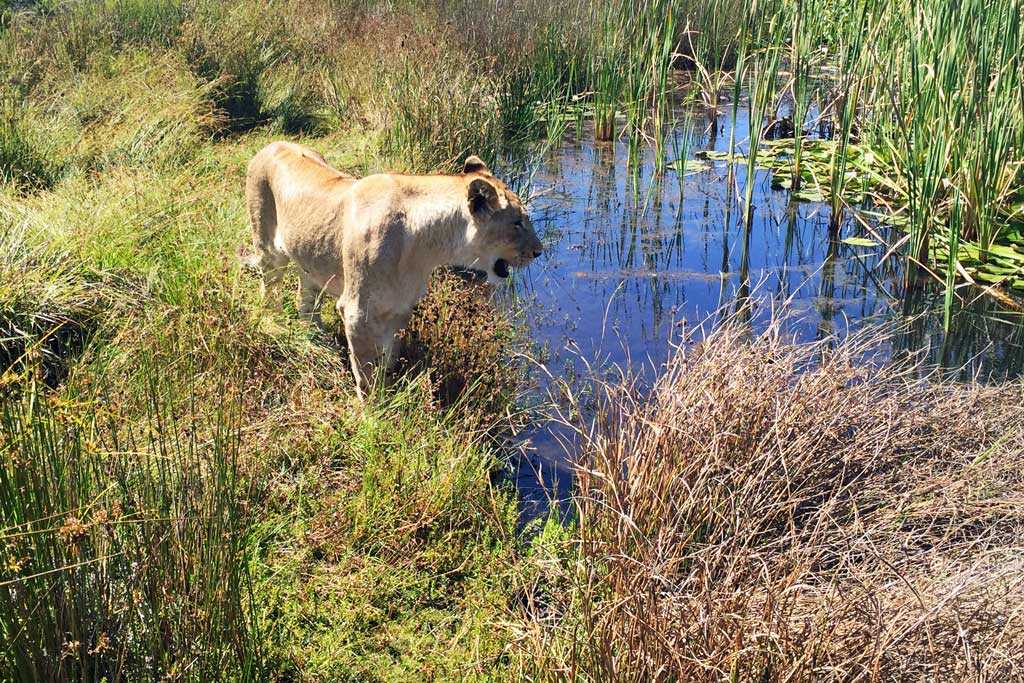 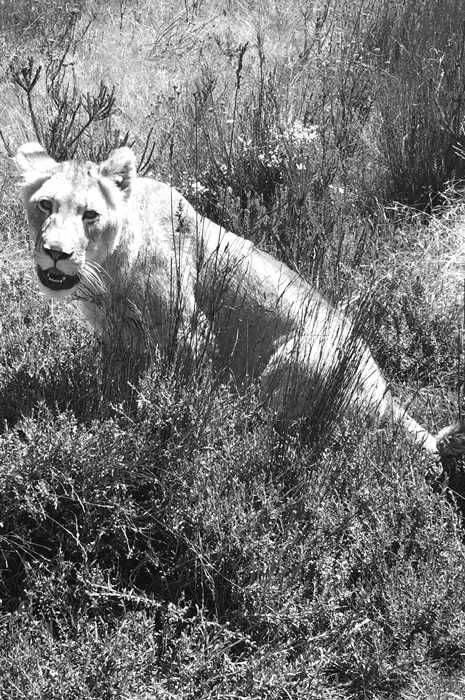 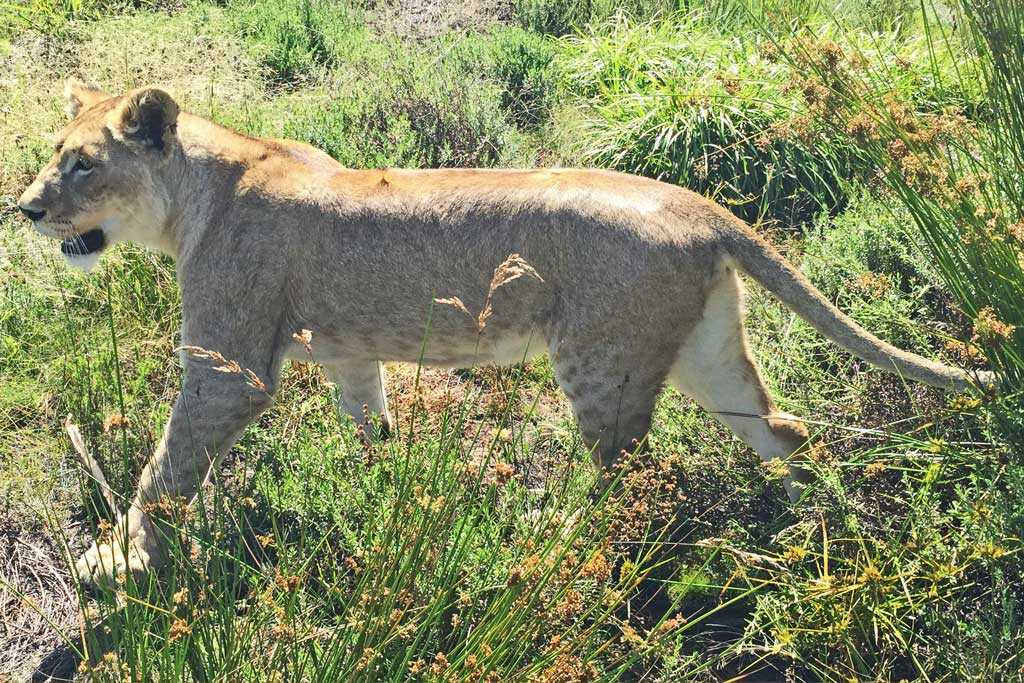