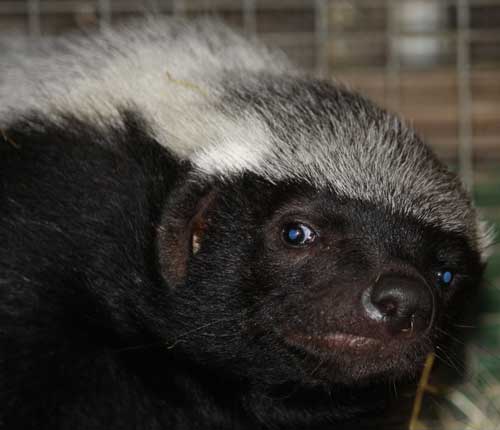 On Thursday 22 May we successfully released our badger, who was with us for nearly 10 months of rehabilitation. The honey badger was admitted on the 6th of August after some tests at Knysna Veterinary Clinic, which revealed that he had suffered a head injury. Badger was less than 10 months and it was unusual seeing him wondering around by himself since the mothers remain with their children up to 18 months.

It did not take much time for him to heal, within a month he was busy roaming around his enclosure showing traits of any other healthy badger. He managed to gain reasonable weight whilst with us which was a good sign that he was recovering well. We had to take some considerable time to observe him so we could release him fierce and fearless to explore nature. Unfortunately as we were about to, the Covid 19 Lockdown started and we had to stay with him a little longer till last week. CapeNature, a strong partner of ours assisted with finding a forever home for him. This was perfect timing as he was now stronger than ever. A short trip took him to a private reserve and on opening the cage his joy could not be ignored as he sniffed and ran around.

Special thanks goes to Dr Mark from the Knysna Veterinary Clinic for his dedication towards wildlife and the skilled assessment and treatment of this young badger. We would also like to thank Oakhurst Insurance Company who really live up to their moto. Oakhurst staff were so touched by the badger’s plight, that they came forward to contribute towards the costs of his on-going rehabilitation. Donations also came in from concerned visitors and friends of Tenikwa who helped us cover medical and food costs. Happy ever after could never be predicted better. Thanks guys.