An Article appeared in The Knysna-Plett Herald

The sandy beaches of Plettenberg Bay got an unusual visit, this visitor had traveled a long distance and had faced obstacles. The Rockhopper penguin which is normally found on Trista da Cunha and Gough Islands was found by the shore of Natures Valley Beach. On admission at Tenikwa Wildlife it was discovered that the juvenile Rockhopper was molting, thereby needing at least two weeks to be ready for release. How the bird arrived by our shores still remains a mystery taking into consideration that the breeding colonies are 3000km from both the African and South American Continents. Only two possibilities can explain how this Rockhopper penguin managed to travel this far landing on foreign shores. Firstly, strong currents could have carried this juvenile as it could not resist due to molting or it was that sailors could have picked it up to pet it then dropped it off as they were approaching the shores.

What was important at this stage was not to solve this mystery but to rehydrate and medicate the congested lungs. Saving this Rockhopper would mean a step closer to conserving an endangered species. Speaking through the Knysna-Plett Herald we raised that the Rockhopper penguins have declined in population by 90% and why a successful release was important. We had to go an extra mile to feed this bird with prawns and squids since it had an expensive taste. After two weeks of rehabilitating, the rock hopper penguin could be seen swimming with its cousins, the African penguin. Release is going to be done appropriately considering the long distance for it to swim back. Another concern is to place it back with the colony then deal with the consequence of unnatural diseases that could wipe out the colony. Usually we work with other organisations such as Two Oceans Aquarium who can provide a favorable home whilst raising awareness about the plights  of the Rockhopper penguins.

See the article below: 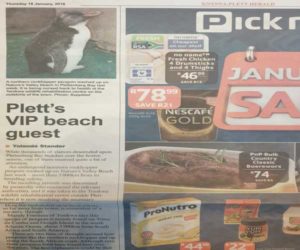 While thousands of visitors descended upon Plettenberg Bay beaches over the festive season, one of them received quite a bit of attention.

An endangered northern rockhopper penguin washed up on Nature’s Valley Beach last week – more than 3000km from its breading colony.

The molting juvenile was discovered by  passersby who contacted the relevant authorities, and it was taken to the Tenikwa Wildlife Rehablitation Centre outside Plett where it is now receiving the necessary treatment.

How the bird ended up in local waters, so far away from home, is somewhat of a mystery, though.

Mandy Freeman of Tenikwa says this species of penguin is mainly found on Trista da Cunha and Gough island in the south Atlantic Ocean, about 3000km from South Africa and South America.

”There are two lines of thought around how penguins have been like the northern rockhopper end up along the South African coast. Although rare, these penguins have been found here over the years. The first explanation could be that they get caught up in currents while molting. Another possibility is that these penguins are taken on board ships by sailors who keep them as pets. When they approach a port they chuck the bird overboard and they end up here, ”Freeman says.

According to international agreements,she explains these species cannot be released as they have no natural resistance to diseases found in South Africa. If they are exposed to these diseases and go back, they could wipe out an entire colony.

“Generally they are nursed back to health and then go into conservation to create awareness”. Freeman says the northern rockhopper is an endangered species as its population has decreased by 90% since the 1950s.

“The one found in Plett was not injured, just molting. It was brought to Tenikwa where our team rehydrated it. It had bit of congestion in the lungs, but this was treated with antibiotics. He is already swimming around. The moulting process will probably be completed in the next two weeks.”

She says the little penguin has quite the expensive appetite and only eats prawns and squid. “Its mouth is too small to consume the sardines we feed the larger penguins.”

Once the penguin is strong and healthy enough – and the necessary blood tests have been done, which would also determine the bird’s gender – they would most likely contact the Two Oceans Aquarium to take it in, ” Freeman says.