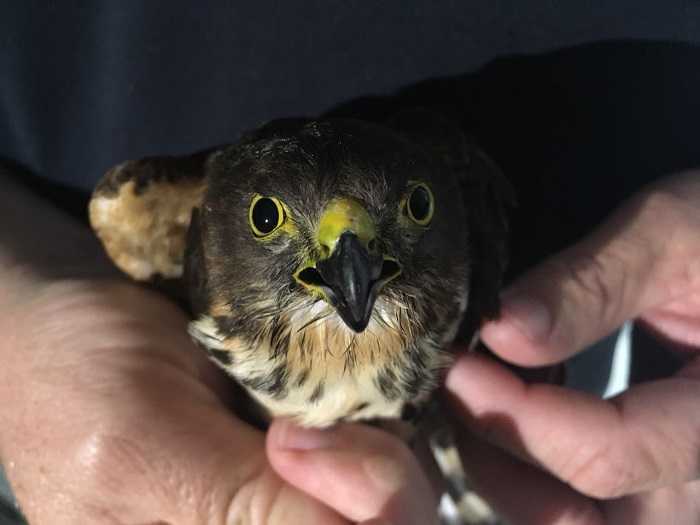 A Sparrow Hawk was found by a security guard at Market Square Plettenbergbay, it was dazed after flying into a window. Barney from the market square immediately called Tenikwa. The bird was stabilized overnight and showed improvement, we were able to feed and hydrate him before releasing him in Plettenberg Bay.

Mark Brown from Natures Valley Trust was kind enough to ring him and also did the release. 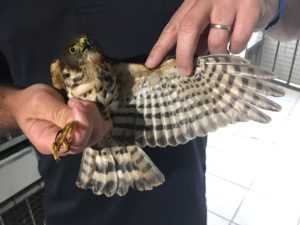 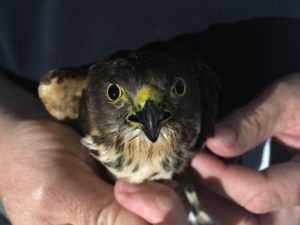 Many people see Sparrowhawks as ‘garden terrorists’. They watch these powerful birds swoop down to try to catch a tit, a finch or a Robin from a birdfeeder and feel that they are harming the very birds they are trying to help by putting out food however this is not the case. By all means help the small birds evade the hawks, but we should actually be very pleased to have the hawks coming to our gardens: they show that our wildlife is recovering well from a terrible episode of destruction wrought by modern chemicals.

Sparrowhawks were very badly affected by the poisoning of much of our wildlife 40 years ago through the use of toxic chemicals on farmland. The organo-chlorine compounds – including DDT, Dieldrin and Aldrin – that were designed to kill insect pests had a terrible effect on birds and other organisms high in the food chain. As well as the many direct deaths that resulted, there were awful effects on breeding birds since their metabolism was affected and they laid thin-shelled eggs which failed to hatch. Indeed, many eggs were crushed by the weight of the incubating female. Sparrowhawks were wiped out in large areas of the countryside and a whole generation of country dwellers was raised without Sparrowhawks being a normal component of the bird community. Their return in good number  to towns and cities, is a triumph for conservation.

The numbers of Sparrowhawks are controlled by the numbers of their prey – and not vice-versa – and they are definitely not responsible for the sad declines of small farmland birds over the last 25 years. It only takes a moment’s thought to see that this must be true of a predator that preys only on small birds. As soon as the prey population suffers a decline, the predator’s food becomes harder to find – and so the predator suffers long before the prey are wiped out.