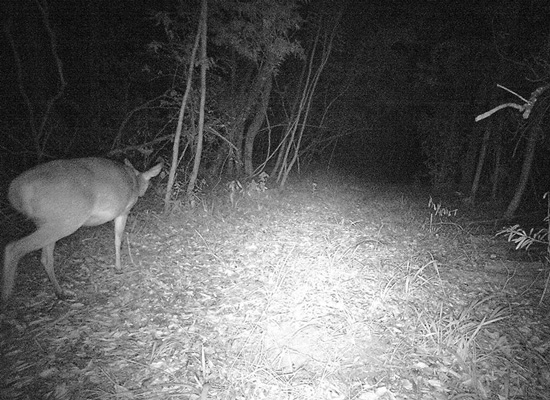 Tsitsikamma is a khoikhoi word which translates to  a place of abundant or many waters. We have witnessed that what is abundant in this spectacular area is not only the water but hundreds of species of animals. At Tenikwa Wildlife we boast about being at the foothills of such a bio diverse location which always has wild surprises. We set up a night camera and within just a few hours, a number of different wildlife species, big and small were captured. This makes our hearts jump with joy as it serves as a constant reminder that the decision to leave two thirds of the property undeveloped for naturally occurring wildlife was not a mistake. If not for these spaces, where would the wild animals go? Porcupines and bush bucks were some of the many animals we were able to capture on our camera.

During the day the Tsitsikamma forests seems to be more quiet, having mostly sounds of different birds singing. For wildlife enthusiasts, a night walk will give you an appreciation of what the Tsitsikamma forests has to offer. Vegetation is in abundance giving wildlife a secure food source. Fruits, seeds, leaves and roots can be a treat for herbivores. As for carnivores, prey of different sizes roam around. It is only us human beings who can interfere and negatively impact through practices such as hunting and deforestation. Urban sprawl is also one of the main factors contributing to some wild animals being at risk of being endangered, thus the need to leave some spaces as wild. Nature reserves such as Sanparks Tsitsikamma help to maintain the pristine state of wild spaces therefore conserving biodiversity.

Imagine the cape floral fynbos with its many families being on the same property where the Tsitsikamma forests starts. Imagine a lot to see, discover and learn. Let this imagination come to life at Tenikwa Wildlife.